We’re in Spanish territory, to be more precise we’re in Abarán, in the province of Murcia, fruit-growing region of South East Spain. Here we are in the Ricote Valley on the banks of the river Segura, 40 km from the city of Murcia itself.

Abarán belongs to the comarca of Vega Alta del Segura, the chief town of which is Cieza.

Today, we are guests of Frutas Esther S.A.

We are welcomed by the technical director, Agricultural engineer D. Jorge Gómez Montiel, who explains that the enterprise cultivates its crops over an area of some 1100 hectares. These crops include: table grapes, peaches, nectarines, apricots, plums and strawberries.

one, as mentioned, in Abarán, the other in Cartaya (in the province of Huelva in the Southern Region of Andalusia about 100 km to the South West of Seville), where strawberries are grown.

Eng. Gómez Montiel also tells us that he heard about the agricultural machines produced by Martignani through certain of his agronomist acquaintances who had been using them for years and who were well aware of their quality.

To date, the enterprise has used 6/SIX Martignani Electrostatic Mist blowers purchased at different times from the year 2004 onwards. 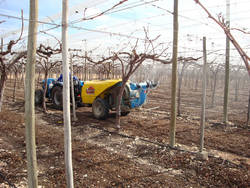 - litres/hectare actually applied according to Martignani’s instructions, varying, in relation to the growth phase and type of crop, from 70 litres/hectare up to a maximum 500 l/hectare.

- The goal of 70 l/hectare was achieved, in table grapes, thanks to the new design spray head 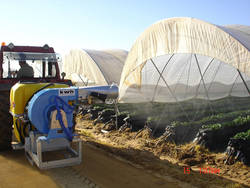 Lastly, Eng. Gómez Montiel tells us how they were able to use products, for their table grapes, that they would have been unable to use with conventional air blast sprayers since the grapes would have become stained. Working with Martignani’s Electrostatic mist blowers also allowed Frutas Esther S.A. to save a lot of time (cutting down on production/labour costs to a considerable extent because Martignani mist blowers don’t have to be filled as often as the normal turbo sprayers) and save on chemicals since there is no dripping. Last but by no means least, they were able to ascertain how Martignani mist blowers maintain and even increase the efficiency of the various different chemicals used.